I was this close to this thing 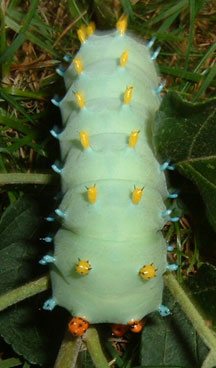 Last Sunday morning, after a rowdy breakfast with the kids at TJ's on High, Frankie and her friend Aaron and parents went to Highbanks Metro Park and found this big, fat, squishy Cecropia Moth Caterpillar. After the kids watched it a while (Frankie fortunately didn't squash it), Trish bravely took it to the edge of the woods so it could turn into a moth in peace. Click on the image to go to a cool site called "What's that bug".

And, by the way, here's a picture of the beautiful moth it will turn into. It says on that page the female won't live longer than 2 weeks because it lives only to lay eggs and die. And I thought I was a dedicated parent.

I had one of those in a jar when I was a kid. I got to watch it form a cacoon, break out of it, and turn into a moth. I released it in my backyard. It was GORGEOUS!

Cool indeed. I wouldn't touch it though - too bugphobic.

How big was that thing? It looks gigantic. o_0