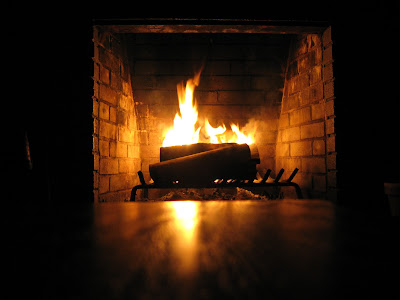 This week's been interesting.  Snow, ice, more ice, some snow, ice lingering, ice melting and power off for about 48 hours.  Having sent the women folk to a warm hotel nearby, I snagged some conversation with the locals and a pint of 2 Hearted Ale at Crest Tavern, and the dog and I began our squatting in an attempt to hold down the ranch.  I got a bunch of firewood and set a good fire.  The house was about 45°F and around the fire maybe 62°F when I wasn't asleep.  Sounds pretty good, but then Scoopy got nervous when the crackling of the burning logs peeped through the silence of the night.

After a couple months we've learned Scoops to be a bit on the nervous side when it comes to funny noises.  Today I got her some Dog Appeasing Pheromone, the synthetic equivalent of a calming scent given off by bitches in heat.  I sampled a squirt on the way home from the vet, didn't do much for me, but we'll give it a shot tonight.  She should be less nervous since the whole pack will be assembled.

An adventurous few days, but I'm glad it's over.  Hope yáll got your power back.

Wondered if you had gotten hit. Gina, apparently, didn't. We are OK on the power level. Most of our precip was sleet, so I'm iced in, but warm and with water. As you can see most of my virus damage aftermath has been rectified. Thank God!
Love, Mom/Peggy/Grandma