I'm putting it behind me. Really. 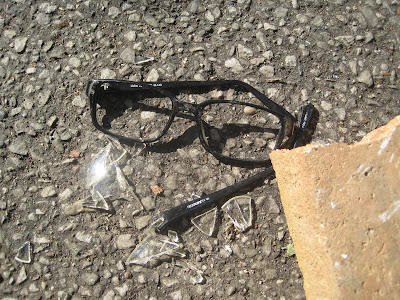 A few months ago, some really, really drunk guy knocked on the door to our bedroom (an outside door) aggressively and wanted in.  I was petrified and stood by the door waiting for him to punch in the window to get in.  I'm not sure what I'd have done, but I was waiting for it.  Trish called the police, they came, dragged the drunken sot away and let him sober up somewhere.  Done.

I'm not going to apologize but I may never be able to let go of this.  He scared the crap out of us even though in hindsight, he was incapable of danger, he could barely walk and made a bad call while blasted.  Looking around the backyard where he stumbled prior to coming to our door, he apparently left behind some stuff, Caravaggio eyeglasses and a hat.  I tried for some weeks to get his name.  I even amended the police report with a note to get me his name so I could return his eyeglasses.  I never found out his name.  I had planned on returning his glasses.  As much as I'd like to convince myself that's all I wanted to do, I knew, if we got to meet, I'd probably try to hurt him.  So, today I give up.  To commemorate this event I "let it go," I obliterated the glasses and will try to move on.  I hope we never meet.