This is creepy. Last Saturday at Whetstone, soccer game day, I parked my car, and in a flurry of exiting the car, I forgot to lock it. I only lock it when my GPS is in there, but this time I forgot. So, it got stolen. Kind of a bummer since I can am able to get lost going from Whetstone to my home. The GPS was made for terminally confused drivers like me. The most worrisome part of this is when you press "HOME" on the unit - there you are. Bummer again.

He also took one of those clear plastic credit card holders in my door pocket - the bummer hat trick. It containing my Sally Beauty member card (I buy really dangerous chemicals there), a gift card to Cameron Mitchell's restaurants for $50, my art museum membership card and a couple wallet sized pics of Frankie. Last night, my car was parked in my driveway, unlocked, and the little clear wallet thingy was returned, conspicuously in view. I am feeling even more creeped out than when it was stolen.

I know I do not wear nice clothes, I'm not tall, I don't drive a government-issued, ginormous, black, shiny, bullet-proof Suburban, don't typically have large-breasted, short-skirted lab technicians at my behest running DNA tests in under an hour, but I have studied quite a bit of psychological profiling between the hours of 8 and 10 at night and have learned quite a few things. The Mrs thinks I misplaced said wallet insert and simply found it. WAY TOO SIMPLE. Here are the traces left behind and the conclusions easily drawn from the evidence:


We used our family sketch artist: 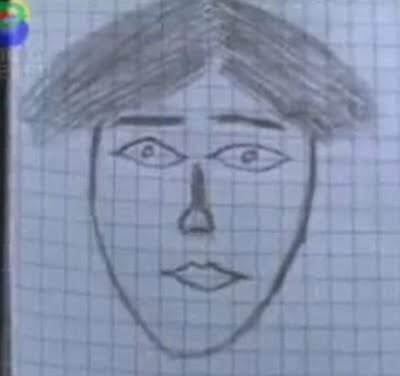 We're currently running DNA from the spittle on the crumb, updates later.

I hope you nail that punk. I did see a guy with a horned viking helmet after our games were over at the event going on at the shelterhouse-not sure if it was a memorial or wedding. He looked very suspicious. Vikings are notorious for getting lost.

Joe, we'll set up a sting this Saturday.